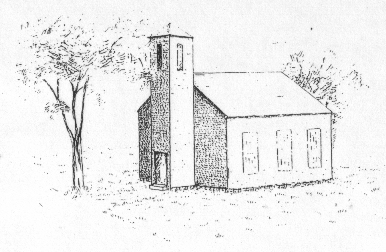 St Paul’s began on July 12, 1758 when the frame of a wooden church (left) was raised in Dedham for a small band of about a dozen Church of England families. The church was made of rough boards, measured only 30 x 40 feet, and had no seats. Although the small band of Loyalists had been worshiping in houses in Dedham and Stoughton, the building of the church here was made possible by Samuel Colburn’s generous bequest of land for the founding of an Episcopal Church in Dedham. The new church was initially supported by Old North, Boston, Trinity Church, Boston, and Christ Church, Quincy, all Loyalist churches.

During the Revolutionary War, when Loyalist churches continued to offer prayers for the King, the rector in Dedham, the Rev. William Clark, and many members of the congregation were persecuted and the church was closed. It reopened in 1791 and the Rev. William Montague was called to serve as rector for 100 pounds sterling a year. 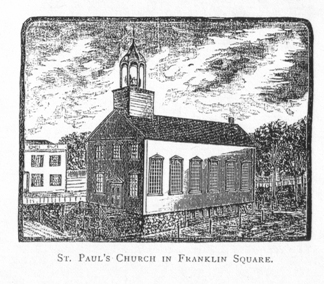 In the early 1800s the church, incorporated as the Episcopal Church in Dedham, became known as St. Paul’s, and in July 1818, the first officers were chosen: senior warden, junior warden, five vestrymen, a treasurer and clerk. During the first 100 years, the young church struggled. The first building, used as a military storehouse during the Revolution, became dilapidated. The second church (right) collapsed in 1797 when it was moved to Franklin Square. It was rebuilt, but by 1845 it was demolished when it became “rickety and porous.”
In 1846, the third building (below left), an impressive wooden Gothic structure, was consecrated, but it was destroyed by a disastrous fire in 1856. Mindful of the hazards of wooden structures, plans were immediately made to construct the next church, the present building, of Dedham granite (below right). It was consecrated in June, 1858 and the interior furnishings included chestnut pews, a Hook organ, and a magnificent stained glass window of St. Paul above the altar. In 1869 the tower and spire were completed, and in 1881 a chime of ten bells, ranging in size from 3050 to 250 pounds, was given by Ira Cleveland who was warden for 51 years. 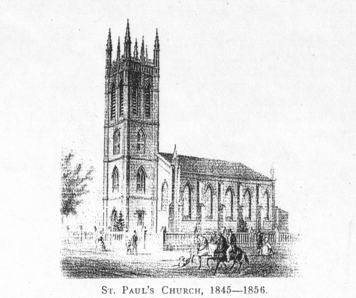 In those days, wardens and members of the vestry could succeed themselves for an unlimited number of years if they wished to serve. This was changed in 1938 when it was decided to rotate vestry members and to increase their number to nine members.
During those early years, churches were supported largely by public taxation and the sale or rental of pews, the latter practice not ending at St. Paul’s until 1926 when all pews became free.
Throughout its history, St. Paul’s has benefited from its parishioners who added to its fabric and beauty through generous donations. The chancel was enlarged in the 1880s and the wrought iron rood screen given in 1893 in memory of Albert Nickerson. In 1927, the parish house was added by the George C. Lee family in memory of Madeline Lee. It contained a kitchen, choir room, church school and an upstairs sewing room. In the basement there was a gymnasium with lockers, hand ball court and shower. The office wing of the parish house was given by the same family in 1957. The parish house has been variously used over the years for meetings, church school, receptions, square dances, fairs, and a Mardi Gras benefit for Hurricane Katrina victims. During the 1960s the Red Cross used it as a blood donation center.
Property was added in the 1960s when the former “telephone building” on Church Street was purchased for use by the church school. It was later sold in 1971 when the church again expanded its facilities with the purchase of the adjacent Harrison Black property. This historic house was first rented; then used as a rectory by The Rev. Blayney Colmore. Subsequently it has been used for church school, meetings, Christmas fairs, the Church Mouse Thrift Shop, the preparation of meals by parishioners for the homeless at St. John’s-Bowdoin Street, Boston, and by HESSCO for Meals on Wheels. This house became known as the Old Rectory in 1982 when the church purchased the property at 57 School Street to serve as our present rectory. 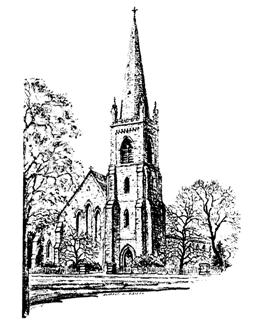 In the 1980s, in line with current liturgical practices and a revised prayer book, the high altar was detached and moved forward so that the priest could celebrate facing the people. At the same time, the baptismal font was moved to its present location, the memorial garden was made, and in 1999, the church was made handicap accessible.
The brick chapel, constructed in 1875, was used for meetings of the boys’ choir (founded in 1865), for church school on Sundays, and a private nursery school on weekdays. It was sold to St. Paul’s Nursery School in 2004, but is still used by the church for Sunday child care.
St. Paul’s has supported the needs of communities far and near. During both world wars, the church was used to make surgical dressings for the Red Cross, and funds were raised for military chaplaincies. For many years it was the women of the church who spearheaded efforts in mission and outreach. In the 20th century, the Church Service League and the Women’s Auxiliary provided goods and services for the needy locally, nationally, and internationally. In the 1970s and 1980s, this began to change as women joined the work force. Interest in women’s groups waned, but outreach continued with a Mission Committee composed of both men and women. In recent years the church’s local mission has featured the Dedham Food Pantry and its international mission has included support of a Cambodian land mine victim and a medical mission in Haiti.
In 1931 women became full voting members of St. Paul’s church, and in 1971 the first woman was elected to the vestry. In 1969, the girls’ choir joined with the boys when the 9:15 a.m. service was eliminated. Women were ordained to the priesthood in the Episcopal Church in the 1970s, and after employing several female deacons, St. Paul’s had its first female priest as assistant in 1987.
Church school enrollment has fluctuated over the years to reflect the times. During the Depression, attendance was high; during World War II, with the shortage of gas it was low. As children began to be involved in more outside activities on Sundays, church school was tried on Thursdays for a while in the 1970s.
During its 250 years of existence, St. Paul’s has had a long history of worship of God as Episcopalians in this place and we hope to continue to do God’s work here and in the world in the years to come.
Sally Burt, January 2008 (being our 250th Anniversary Year)