Skip to main content
Home / Do You Consider Yourself To Be A Leader?

Do You Consider Yourself To Be A Leader?

S.I. McMillen tells the story of a young woman who wanted to go to college, but her heart sank when she read one of the questions on the application asking, “Do you consider yourself a leader?” (None of These Diseases)

Being honest and conscientious, she wrote, “No.” and returned the application, expecting the worst. To her surprise, she received this letter from the college: “Dear Applicant: A study of the application forms reveals that this year our college will have 1,432 new leaders. We are accepting you because we feel it is imperative that they have at least one follower.”

In today’s Gospel lesson, James and John (no shrinking violets they) come to Jesus with a request: “Teacher, we want you to do for us whatever we ask of you.” Wise to the ways of human nature, Jesus knows better than to smile benignly and nod his head in the affirmative. Instead he says: “What is it you want me to do for you?” James and John reply: “Grant us to sit, one at your right hand and one at your left, in your glory.”

It’s an audacious request—and we may well be tempted to look askance at their boldness; but the flip side of the asking is this—James and John, they really believed that Jesus could do for them whatever they asked. So, there’s an outrageous boldness in their request, to be sure, but also a certain amount of faith. I suppose it is for this reason that Jesus doesn’t simply turn them out—but goes on to say: “You do not know what you are asking. Are you able to drink the cup that I drink, or be baptized with the baptism that I am baptized with?” They are both clueless and captivated by the idea of power. To put it in modern-day idiom—they had their sights set on the corner office on the top floor. They wanted the power—and along with it, the glory they believed should be rightfully theirs as disciples and friends of the Messiah.

Of course, in their minds, Jesus would be a better King than those in the past. His would be a benevolent, righteous and Godly reign—but in their mind, it would be a reign nonetheless, and James and John wanted their place in the kingdom—preferably with a padded leather seat.

And, in truth, who can blame the two of them for hoping this would be the case. Haven’t multitudes of people before and after James and John hoped for precisely the same? In the words of Barbara Brown Taylor: “Every now and then the powerless become powerful and nine times out of ten they turn out to be as heartless as their predecessors. And yet, most of us have this abiding hope that if only the right people can get into power and stay there, without letting their power corrupt them, then the world will be a better place. That is why we campaign for people. That is why we vote for them. Because we want them to sit at the head of the table and make good decisions for us.” James and John wanted the same thing. They knew that Jesus had power. And they both believed in and were committed to him. What they failed to perceive at the time, was that Jesus’ power wasn’t the kind that was made perfect through might—but through weakness instead. The kind of power Jesus wielded couldn’t be discerned through grand gestures and awesome displays of military might, but through humility. His was the kind of power that demonstrated itself through mercy and compassion. His was a servant power. Invite Jesus to a banquet, and he wouldn’t be the one seated at the head of the table. No, he’s be the person refilling the wine glasses. Jesus would be seated with the fellow servers in the kitchen—and there, more than likely, he would do his finest work—not hobnobbing with the rich and powerful, but by working hard to ensure that even the very least of the guests still had all they needed for an absolutely wonderful time. Suffice it to say, James and John hadn’t a clue. But they would, in time.

For, here’s the truth about power. The people whom we often think of as the most powerful, are oftentimes also the most isolated. They are the ones skirted off in limos, surrounded by bodyguards and they return home to gated compounds. Jesus has no interest in that kind of power. Jesus is most at home among the very people he came to save. Look for him, if you will, in the high and mighty places, but odds are good that the easiest place to spot him will be alongside others who serve. He’s there in the kitchens and gardens, in the hospital rooms and prisons. He’s in the soup kitchens and homeless shelters, in the war zones and disaster areas. He’s even here, in the midst of those of us who are called to serve in his name. One place he is not—is far removed, where neither the helpless nor the hopeless can reach.

Dorotheos of Gaza, a sixth century teacher, once preached a sermon for the monks in his monastery who were grumbling that they were unable to love God properly because they had to put up with one another’s irritating presence. No, Dorotheos told them, they had it all wrong. He asked them to visualize the world as a great circle whose center is God, and upon whose circumference lie human lives. “Imagine now,” he asked them “that there are straight lines connecting from the outside of the circle all human lives to God at the center. Can’t you see that there is no way to move toward God without drawing closer to other people, and no way to approach other people without coming nearer to God.”

I began today’s sermon with the story of a student applying for entry to college, who did not see herself as a leader. If I had to hazard a guess, she would probably not be the first one to raise her hand in a discussion. She would have been neither the funniest nor the most fashionable girl in school. Maybe she wasn’t even in the top ten percent of her class. She may not have had the makings of a good leader in the eyes of the world—but my guess is this, that Jesus looks upon her and sees absolutely stellar servant material. For she is just the right kind of recruit—a potential disciple, a faithful follower of Christ in the making. Would that we all would possess the same outstanding qualities. Our challenge this week is to reach out to those around us, serving them in the name of Christ, and in so doing, drawing nearer to the heart and mind of God. In Jesus’ name. Amen. 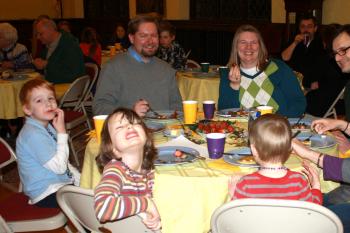