Can’t you just picture the scene; Jesus walks to the lectern and reads from the scroll of the prophet Isaiah: “The spirit of the Lord is upon me, because he has anointed me to bring good news to the poor. He has sent me to proclaim release to the captives and recovery of sight to the blind. To let the oppressed go free.” Now, this is good news and these are gracious words. In today’s Gospel we come to understand that this warm reception given to our Savior as he spoke in his home town of Nazareth was short. In fact, it lasts all of two verses, because what Jesus goes on to say is unsettling in the extreme. He speaks not simply of the people of Nazareth, or even the people of Israel. Instead, he talks of distant places and foreign peoples; of how God’s concern extends not only to the care and comfort of the chosen people of Israel, but those on the margins of society and outside its borders altogether.

It’s enough to make an individual longing for a Hallmark movie ending, sigh in frustration. It could have been so easy for Jesus to placate the people of Nazareth. Work a miracle or two, say the things the people expected to hear, comfort them with carefully chosen words of Scripture and leave with their blessing. And yet, the home-town boy does nothing of the sort. Here, at the beginning of the lesson, we are primed to receive the warmth of a homecoming; and we end with a stealthy retreat amongst murderous townsfolk in its stead.

We, who are expecting a substantial helping of comfort at the beginning of this passage, are served up a monumental slice of disillusionment. Barbara Brown Taylor writes that disillusionment, even though it stings, is essential to the Christian life: “Disillusionment is, literally, the loss of an illusion—about ourselves, about the world, about God—and while it is almost always a painful thing, it is never a bad thing, to lose the lies we have mistaken for the truth.”

You see, the people of Nazareth, they wanted to hear only what conformed to their ideas about God. And Jesus, well he was having none of it. They saw what they wanted to see, and when a viewpoint was offered that painted a different picture from what they imagined, they refused to look.

They are not alone. In his autobiographical account of the holocaust, “Night”, Ellie Wiesel tells the story of his experience. He introduces us to Moishe, a likeable individual who actively participated in the synagogue and loved God. But Moishe wasn’t a native of the village of Sighet in Hungary, and so, along with other foreign born Jews, he was expelled. Wiesel tells us that the deportees were quickly forgotten by the townsfolk. He writes: “A few days after they left, it was rumored that they were, in Galicia, working, and even that they were content with their fate.” Yet Moishe miraculously returns to Sighet, and with him, he brings a story too unsettling for the villagers to accept. He speaks of how, when the train stopped, the people were ordered out of the cattle cars and ordered to dig huge trenches. Following this, the Gestapo, without passion or haste, shot their prisoners who were forced to approach the trench one by one and offer their necks. Infants were tossed into the air and used as targets for the machine guns. By some miracle, Moishe was shot in the leg and left for dead. And he determined to come back to Sighet in order to warn the Jews there that the time had come to flee. “But the people not only refused to believe his tales, they refused to listen. Some even insinuated that he only wanted their pity, that he was imagining things. Others flatly said that he had gone mad.” Moishe wept and pleaded. Wiesel writes:

“Even I did not believe him.” (and goes on to say) “Once, I asked him the question: “Why do you want people to believe you so much? In your place I would not care whether they believed me or not.”

“You don’t understand,” he said in despair. ‘”You cannot understand. I was saved miraculously. I succeeded in coming back….I wanted to come back to warn you. Only no one is listening to me…”

This was toward the end of 1942. The people of Sighet contented themselves with an illusion of security until the German Army vehicles rolled into town. “I tell you, no prophet is accepted in the prophet’s home town.”

Human beings, well…the truth is, we tend to be parochial. Many of us simply want comfort and security; and what that means is that the known world extends only so far—to the end of our neighborhood, our state, or the genetic pool of those we consider family. For many folks it’s a stretch to think in terms of country and even fewer conceive of themselves as members of a world community. How many of us have come across otherwise well-intentioned Christians who have implored that all charity be kept local with the oft-repeated phrase: “We have hungry people here…” as if they cannot afford to give more to assist others in need.

Today’s lesson explodes the myth of parochialism and invites us to see the larger trajectory of God’s compassion and grace. By reminding us of the stories of the widow of Zarephath and Naaman the Syrian, Jesus challenges us and the people of Nazareth to see that God’s love and concern extends farther than the borders with which we are comfortable. Imagine God being sent to the people we consider enemies, unlikeable or even immoral. Really, take a moment to picture them—whoever and whichever group you think is most undeserving of grace—there are plenty of them out there, and you begin to get the idea of why the people of Nazareth were upset with what they heard coming from the mouth of our Savior. It was a picture which, literally, drove the people to rage.

The lesson today invites us to think of how we might be like the citizens of Nazareth—or Sighet, content with the way we think things should be, rather than the way they are. They encourage us to take the decidedly uncomfortable step of listening, of watching and praying to discern the truth of what the prophets who speak today are saying. This reading encourages us to step outside the comfort of our world view.

Ask yourself this question: With what, do you think, God wants us to be concerned? Where is Christ calling us? Where is Christ calling you? Learn to accept disillusionment as the gift that it is, for ultimately, it is calling us to leave our illusions behind in order to find and follow something more real, more true, and far more hopeful…Jesus himself. In His name. Amen. 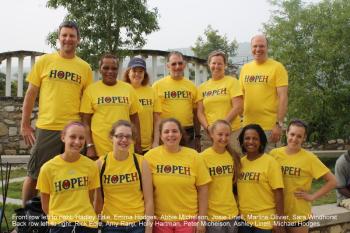