In his inimitable style, Frederick Buechner describes Goliath: he “stood 10 feet tall in his stocking feet, wore a size 20 collar, a 9 ½ inch hat, and a 52 inch belt. When he put his full armor on, he looked like a Sherman tank. Even stripped to the bare essentials, Goliath had plenty to carry around, and flesh and bones were the least of it. There was the burdensome business of having to defend his title against all comers, and, of course there were the mangled remains of the runners-up” (with which to contend).

The story of David and Goliath is familiar to all of us—so much so that it hardly needs to be retold. Here we find David, a young shepherd boy, who volunteers to defend the Israelites against the army of the Philistines—troops who aren’t just armed to the teeth, they are an occupying force in the promised land. King Saul is skeptical, but no one else is stepping forward to volunteer. And thus, in the supreme position of an underdog (and really, who doesn’t love an underdog)—with no armor, no experience in battle, and no traditional equipment David faces down Goliath. The one thing, the only thing, David has on his side is confidence. Yet what makes all the difference—the deciding difference, in fact, is this—David’s confidence is in his God, and not his own strength. Young David’s secret weapon isn’t his slingshot, it’s his faith and trust in God.

Stories of David versus Goliath are inspiring—and, truth be told, they’re all around us. This past Tuesday the United States Senate unanimously approved a bill “The Juneteenth Independence Day Act” to make Juneteenth a federal holiday. The bill was signed into law by President Biden on Wednesday. Juneteenth is the day commemorating the end of slavery in the United States. June 19th marks the day. In 1865 when the last enslaved African Americans in Galveston, Texas, were notified that the Civil War had come to an end and they were free. This news was brought to them more than two years after President Abraham Lincoln signed the Emancipation Proclamation, which freed all slaves in the Confederate States.

With this in mind, I’d like to share with you today the story of Robert Smalls, an American politician, publisher, businessman, maritime pilot and father, whose pursuit of freedom on behalf of his family and his people is as close to a story of David and Goliath as one can get.

Born into slavery in 1839, Robert’s mother, Lydia Polite, was a slave owned by Henry McKee (who may have been Robert’s father). His mother feared for her son’s safety (Robert frequently found himself in the Beaufort jail for standing up to the brutality of slavery), so she arranged with McKee to send her son to Charleston where he would work as a laborer. At the age of 12, Smalls made one dollar a week, with the rest of his wage sent back to his master.

Smalls worked many jobs, mostly in and around the Charleston Harbor. On December 24, 1856, Robert married Hannah Jones, an enslaved hotel maid. With their owner’s permission, they moved in together and had two children, Elizabeth, and Robert Jr. Smalls saved money and attempted to purchase the freedom of his family, but Hannah’s owner demanded such a staggering fee it was beyond any hope of Robert being able to pay.

After the war broke out, Robert was assigned to the Planter, a Confederate military cargo transport. Intelligent and resourceful by nature and by this time an expert navigator, At the age of 22, Smalls was soon taught to pilot the Planter around Charleston harbor, gaining the confidence and trust of the black crew members as well as the three white officers. Knowing the crew trusted him, Smalls devised a plan of escape. One night when the officers left to sleep ashore, Smalls loaded his wife and children aboard, and with the black crew members, took the ship. Smalls piloted the ship out of the harbor, at one tricky point mimicking the stance and voice of the Captain, eventually surrendering the Planter and its cargo to the Union navy with the words: “Good morning, sir! I’ve brought you some of the old United States guns, sir!” And with that, Robert Smalls, and his wife and children and the entire slave crew of the Planter were free. Surely, I imagine Smalls must have felt a bit as though he were David, having vanquished Goliath.

That wasn’t the end of the story. Smalls returned to the Planter as pilot and as part of Admiral Du Pont’s South Atlantic Blockading Squadron. According to the 1883 Naval Affairs Committee report, Smalls was engaged in approximately 17 military actions, including the 1863 assault on Fort Sumter. Following the war Smalls continued to work for the cause of freedom. Elected to the South Carolina State Assembly and Senate, and for five nonconsecutive terms in the U.S. House of representatives (1874–1886) before watching his state roll back Reconstruction in a revised 1895 constitution that stripped blacks of their voting rights. Even then, Robert Smalls did not give up. He said: “My race needs no special defense for the past history of them and this country. It proves them to be equal of any people anywhere. All they need is an equal chance in the battle of life.”

David battling Goliath wasn’t an equal match, neither was the bid for freedom facing Robert Smalls. The truth is, some of the giants that menace God’s people aren’t personal, so much as they are societal and structural. Homelessness and poverty, violence and neglect--these intimidate God’s people; as do sexism, ageism, racism and materialism. These too, seem to tower over our comparatively small statures.

The lesson which the story of David & Goliath gives us this day is not simply to fight the giants—but where to best place our trust as we do so. David fears no evil as he prepares to walk into his own valley of the shadow of death. He knows that God is there with him. It is not because of his skill with a slingshot that David is great—nor is it for his courage. It is because of his trust in God’s ability to lead him into those dark places of life and to emerge the victor that David is great—and is known to us today as King David the Great, a man with a heart for God.

Look around—Goliaths still persist. How different might our world be if we chose to contend with these forces with a confidence—not based on fear, hate or anger—but based upon trust and confidence in God. A God who walks into those dark places alongside us and surrounds us with His never-failing love. Imagine what that kind of trust and confidence could enable us to accomplish! In Jesus’ name. Amen. 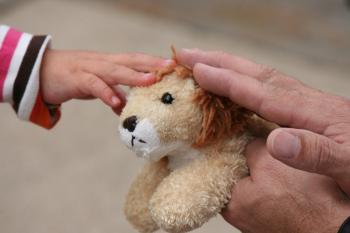