Skip to main content
Home / "How We Are to Live Together: Life in the Body of Christ"

"How We Are to Live Together: Life in the Body of Christ"

Here’s a bit of trivia with which to begin your day. At what liturgy do we hear these words from today’s reading from Romans: “For none of us has life in himself, and none becomes his own master when he dies. For if we have life, we are alive in the Lord, and if we die, we die in the Lord. So, then, whether we live or die, we are the Lord’s possession.”? If you guessed “The Burial of the Dead”, you’re right. These words are contained in the opening anthem read by the priest at the beginning of the service.

At first glance, it appears these words are intended to remind us that we are not the ones in control of our final destiny, that distinction belongs to God. Certainly, there’s truth in this; but if you look at the reading taken in its original context, you come away with a deeper understanding than the words by themselves suggest. Think of this as Paul’s discourse on the ethics of “the life of the body of Christ”. Remember, if you will, that image of which St. Paul is so fond in First Corinthians: “Just as the body is one body, we are one body in Christ, made up of many members.” This is an ethic that does not insist on superiority and refuses to convey its truth through force, but relies instead upon humility and acceptance as a means of conveying grace. Yep, I know, it’s a radical concept for our times—and, quite honestly, the times in which St. Paul lived as well. Counter-cultural as it is, it’s well worth taking to heart.

This reading is in response to a controversy about food. There are those who eat meat and others who abstain. Paul says: “Those who eat meat must not despise those who abstain, and those who abstain must not pass judgment on those who eat….We do not live to ourselves and we do not die to ourselves.” Judgement is the issue. It might seem small enough to us today—but it wouldn’t had you lived in Paul’s time. It’s about whether it is okay to eat meat that had been dedicated to a Roman god in a pagan temple and then sold to the public for consumption. Ask yourself, would you eat the meat? Why? or why not? Today we have different controversies. Must you take the Bible literally, word-for-word, or do you read with a wider hermeneutic? Can a devoted Christian support politicians who do not run on a pro-life ticket? For that matter, can a devout Christian support politicians who work to lower standards of environmental protection? Is heaven broadly inclusive reserved only for those who believe rightly? These are real issues for folks, not easily resolved. So, how do we live together without despising the other?

There is a story written by Rabbi Jeffrey Summit that he wrote for Yom Kippur called “The Rabbi’s Gift” which I believe helps to illustrate the point Paul is making in the reading today—that is, that we are to live together with mercy and forbearance; in a community of faith.

The story is told of a monastery that had fallen on hard times. Once it had been a great order; but clearly, by now, it was dying.

In the woods surrounding the monastery there was a little cabin that a rabbi from a nearby town occasionally used as a retreat. The old monks could always sense when the rabbi was visiting. As he agonized over the imminent death of his order the abbot decided to visit the rabbi and ask for any advice that might save the monastery.

The rabbi welcomed the abbot at his hut and the two commiserated. The rabbi said. “It is the same in my town. Almost no one comes to the synagogue anymore.” So the old abbot and the old rabbi wept together. Then they read parts of the Torah and quietly spoke of deep things. When the time came for the abbot to leave, they embraced one another. “It has been a wonderful thing that we have talked after all these years,” the abbot said. “But is there nothing you can tell me, no piece of advice you can give me that would help me save my dying order?” “No, I am sorry,” the rabbi responded, “I have no advice to give you.” But then the rabbi paused and said quietly to the abbot, “But, there is one thing I have to tell you: One of you is the Messiah.”

When the abbot returned to the monastery his fellow monks gathered around him and asked, “Well, what did the rabbi say?”

"He couldn't help," the abbot answered. "We just wept and read the Torah together. The only thing he did say, just as I was leaving—he said that one of us was the Messiah! Maybe it's something from Jewish mysticism. I don't know what he meant."

In the days and weeks and months that followed, the old monks began to think about this and wondered whether the rabbi's words could actually be true? The Messiah is one of us? Could he possibly have meant one of us monks here at the monastery? If that's the case, who is it? Do you suppose he meant the abbot? Yes, if he meant anyone he probably meant Father Abbot. He has been our leader for more than a generation. On the other hand, he might have meant that Brother Thomas is a holy man. Everyone knows that Thomas is a man of light. Certainly he couldn't have meant Brother Jonathan! Jonathan gets crotchety at times. But come to think of it, even though he is a thorn in people's sides, when you look back on it, Jonathan is virtually always right, often very right. Maybe the rabbi did mean Brother Jonathan, but surely not Brother Philip. Philip is so passive, a real nobody. But then almost mysteriously he has a gift for somehow always being there when you need him. He just magically appears by your side. Could Philip be the Messiah?

As they contemplated in this manner, the old monks began to treat each other with extraordinary respect on the off chance that one of them might actually be the Messiah.

Because the monastery was situated in a beautiful forest, it so happened that people occasionally came to visit the monastery to picnic on its tiny lawn, to wander along some of its paths, even now and then to go into the dilapidated chapel to meditate. And as they did so, without even being conscious of it, they sensed this aura of extraordinary respect that now began to surround the five old monks and seemed to radiate out from them and permeate the atmosphere of the place. There was something strangely attractive, even compelling, about it. Hardly knowing why, people began to come back to the monastery more frequently to picnic, to play, to pray. They began to bring their friends to show them this special place. And their friends brought their friends.

Then it happened that some of the younger men who came to visit the monastery started to talk more and more with the old monks. After a while one asked if he could join them. Then another. And another. And it happened that within a few years the monastery had once again become a thriving order and, thanks to the rabbi's gift, it was a vibrant center of light and spirit.

Rabbi Jeffrey draws this conclusion from the story: "How we judge and treat the people around us, on a simple day to day level, not only determines our relationship with them but the very quality of life in our community. Whether that community is our church, our home, school, office our country, our small worlds, which have become so small during this time of COVID-19, yet so very important, can be transformed when we look at another human being and understand: this person has merit and worth. There are things I can learn from this person.

This reading from Romans might well be viewed as a lesson on the gift of respect for others in the context of community and our service to Jesus Christ, One who is the Lord of the dead and the living, the one before whom we will all stand one day, accountable for our own actions and the actions we chose not to take. “For none of us has life in himself, and none becomes his own master when he dies. For if we have life, we are alive in the Lord, and if we die, we die in the Lord. So, then, whether we live or die, we are the Lord’s possession.” In the name of our Redeemer. Amen. 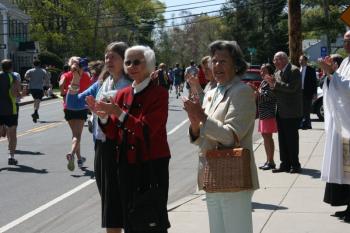