"Sometimes It's The Brief Moments That Count The Most"

We don’t have much time. Truly, we don’t. The Fourth Sunday of Advent—well, it’s here—and then it’s gone—in about as long as it takes to lick a candy cane….slowly. Yet, here is my advice, take this moment, brief though it may be, and savor it. Because this space of time—this glancing blow of the fourth week of Advent that’s here and gone in less than a day, this is itself a gift. It is the best part of a season that all to soon will culminate in the frenzy of rent wrapping paper, the dirty dishes of the Christmas Feast, the list of thank you notes to be written and the trash that needs to be carried to the curb. But today (or at least, these last few hours), there is still time—time to pause and, even if it has eluded you until this very moment, time to drink deeply of the cup of anticipation, without which this Advent season would be incomplete.

Anticipation and expectation. These are the bywords of this holy season. Perhaps, because this year the calendar has given us something close to a week less of Advent to enjoy, we have to re-double our efforts to fill these few hours with the spirit of Advent. But this is not impossible.

Consider, if you will, this brief pause—this week, squeezed into the merest of hours—to be like other moments in our lives pregnant with so much possibility—and fraught with so much uncertainty as well.

Imagine the moment between which the conductor raises his baton and the orchestra plays the first note; the space in time from which the swimmer dives from the starting block and the moment her body hits the water; the silence after the words spoken from one beloved to another “will you marry me?” Not much time—hardly any at all, yet in these brief pauses, everything—utterly everything—hangs in the balance.

Such as it does in the Gospel lesson for this morning. Here, we discover that the Angel Gabriel has been sent by God to the Virgin Mary. Gabriel begins with a greeting. The Gospel tells us that Mary is “perplexed”, some translations say “puzzled” by the greeting. At this point, I imagine that Gabriel comes close to losing his angelic cool and blunders on—sounding something like a salesman who refuses to pause to let the customer ask a question: “Do not be afraid, Mary, for you have found favor with God. And now you will conceive in your womb and bear a son, and you will name him Jesus. He will be great, and will be called the Son of the Most high and the Lord God will give to him the throne of his ancestor David. He will reign over the house of Jacob forever, and of his kingdom there will be no end.” Now, at this point, Gabriel has no choice. He has to take a breath, and for Mary this leaves a moment—a most important space in time in which she can respond. And, make no mistake, her response is of the utmost importance. Because, it’s not a forgone conclusion that everything will turn out just as Gabriel has planned.

Remember the conductor of whom I spoke earlier, holding his baton? Perhaps he is about to lead an orchestra for the first time in Carnegie Hall. Picture him raising his baton, poised for his moment of glory, just then, an individual located behind him erupts into a fit of hacking coughs. Caught off guard, the wand slips from the Conductor’s grasp and clatters to the floor and he must begin again after scuttling around searching for the offending instrument—his “moment of glory” knocked precariously off-kilter. As for the swimmer what if, a foot slips on the starting block, causing one leg to enter lower than the other, thereby causing a drag on what had promised to be a record-breaking heat. And the lover, speaking to the beloved. What if the response was not what was intended? Sometimes it is the small, infinitesimal moments that count for everything.

Gabriel pauses. And Mary speaks. Note, please. She doesn’t snort. She doesn’t laugh or snicker. She doesn’t glance in a panicked visage for the nearest exit in sight. She doesn’t yell for help. She asks a question, and it’s a good one: “How can this be, since I am a virgin?” This Mary, she is a practical sort. Clearly, she’s made of sterner stuff than most. And we can almost hear Gabriel take a deep sigh of relief as he plunges into yet another most improbable answer. “The Holy Spirit will come upon you, and the power of the Most high will overshadow you; therefore the child to be born will be holy; he will be called Son of God.” Gabriel senses that Mary is still listening, and he continues on: “And now, your relative Elizabeth in her old age has also conceived a son; and this is the sixth month for her who was said to be barren. For nothing will be impossible with God.” At last, Gabriel pauses. He’s brought his message, his only job now, is to wait for the reply. And in this space of time, everything, the fate of the universe itself, hangs in the balance.

We don’t know whether it was a matter of seconds, minutes or somewhere in between—but I imagine that in this moment, not only Gabriel, but all of heaven, must have held its breath—waiting, watching and wondering how this young woman, barely into her teens, would respond. And then she replies: “Here am I, the servant of the Lord; let it be with me according to your word.” And surely, then, there must have been a collective sigh of relief.

And then, the Gospel tells us, the angel departed from her. Me, I think Gabriel flew back to heaven as fast as his wings could take him—in less time than the blink of an eye.

Our time, this fourth Sunday of Advent, is short. But brevity, as I hope you have seen, is not an indicator of importance. It’s not the amount of time that we have that matters, it’s what we do with it—it’s how we use those moments, and whether we recognize the importance with which they are endued. Savor these moments of Mary’s joy, enjoy them, put your whole heart into anticipating the promise of the Christ child that is to come. Do this, and I suspect, no matter what you find under the tree or how the feast turns out, your Christmas will indeed be filled with joy. In Jesus’ name. Amen. 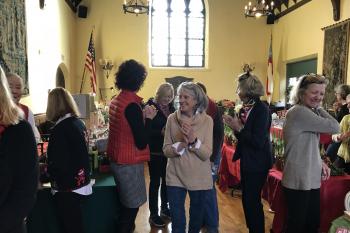