Skip to main content
Home / "Speak Lord, for your servants are listening"

"Speak Lord, for your servants are listening"

“Speak, Lord, for your servant is listening.”

The lesson this morning from the First Book of Samuel, describes the story of the calling of the young boy who would become Israel’s priest, prophet, and prelude to a king. A child, really, at the time of his calling, Samuel, we learn, has difficulty understanding the voice that haunts him in the dark reaches of the night. Twice he believes that it is the voice of Eli, the elderly priest whom Samuel serves in the temple, calling to him; and he runs to Eli who says: “I did not call; lie down again.”

Now, Eli might be old, and close to blind, but we have to give him credit, because even though his eyes might be dim, this man has plenty of perception, and he advises Samuel to lie down again and tells him that if he hears the voice calling once more, he is to say: “Speak, Lord, for your servant is listening.”

There is a difference between hearing and listening, isn’t there. Anyone who has ever attempted to hold a conversation with a sports enthusiast during playoffs knows the pain of this particular dilemma. You could be standing there, speaking to a loved one, less than a foot away, whose eyes are glued to the television; and—in their defense—they might be able to repeat (word-for-word) precisely what you just said. But you, myself, and they—we all know they weren’t really listening. They were preoccupied. The physical ear was working just fine, but the heart was not engaged.

Listening implies engagement. Stephen Covey writes: “Most people do not listen with the intent to understand; they listen with the intent to reply.” There’s a great deal of truth in that sentiment. Most people do not listen. Oh, they may hear—but they are not really listening. In truth, listening is a skill, and not an easy one to master at that. People fail to listen for a host of reasons. Perhaps they’re not open to what others might be saying; maybe they’re not interested in the situation, or simply couldn’t be bothered with how the other person feels. A lack of patience is a barrier to listening; as is a lack of empathy. Believing that one is superior than the rest precludes listening; because, really—what point is there in listening if you think you’re always right. When we’re on the defensive, we rarely listen. And when we feel awkward about what the speaker has said, then we might do anything and everything to avoid focusing on the words that are being spoken.

So, the fact that Samuel listens, is important. For remember, the passage in today’s lesson also tells us: “The word of the Lord was rare in those days and visions were not widespread.”

Imagine that you heard a voice calling your name in the night. What would be your first inclination? Was it a dream, a child, a family member calling for you? Perhaps we might rationalize that the “voice” we heard was simply the wind, or perhaps the creaks or groans of a house, or the heat pump turning on. My guess is that we’d come up with a hundred reasons other than the Almighty to rationalize our experience.

So, it’s at this point that we have to bestow a good deal of credit upon the elderly priest, Eli. For, although he might be losing his eyesight, he advises Samuel to listen. So, think about this. Eli’s guidance in this moment is crucial. You see, this isn’t a story simply about Samuel. This, is a story about Samuel, Eli and God. All listening and communicating with one another. Without support from his mentor, perhaps Samuel would have simply ignored the voice and gone back to bed, none the wiser. And, if Eli had failed to take Samuel’s experience seriously—or, had he been jealous; angry that the Lord was not calling him, perhaps he might have advised his young charge that the voice needed to be ignored and forgotten. Among the things we learn in this story is this; that the companions we meet on our journey, and those we surround ourselves with in our daily life are important. They are part and parcel to aiding our discernment. In our second lesson today from the Gospel of John, we might conclude that while Nathaniel might have made his way to Jesus on his own; nonetheless it becomes clear that he was fortunate Philip was there to give him a nudge, and point him in the right direction when he said: “We have found him about whom Moses in the Law and also the Prophets wrote, Jesus, son of Joseph, from Nazareth.”

The truth is, this journey of life is much easier if we are blessed to have people with us to assist us on our way. Friends, who advise us to listen; and mentors who encourage us and are kind enough to point us in the right direction. Whether you are the one called, or the friend or mentor whose wisdom is solicited, there is this to consider. You are crucial to the journey which ensues.

On a weekend in which we remember the life and ministry of Dr. Martin Luther King, Jr, it’s good to bear in mind these points, made clear to us in the lessons from First Samuel, and the Gospel of John, about the importance of call, discernment and response. Dr. King was a young man whose ink was barely dry on his diploma, when he responded to the prophetic call of God. Because Dr. King listened, he was able to communicate a vision of peaceful non-violent resistance and racial harmony to people throughout our country and the world. Those who heard this vision, responded to the hope his words offered, and still offer to us today. The call and response of Dr. King and the people who continue to follow his vision continues to offer hope to a world which sadly, as we saw this past week, is torn asunder by a racial divide. Dr. King’s vision has not ended; it has been handed down to us; and we would be wise to continue to listen to the words he spoke and the vision he offers—for they continue to offer hope to a world in need of healing.

It might be true that our days, like the days in which young Samuel lived, are those in which the word of the Lord is rare, and visions are not widespread. And yet, I am convinced the voice of God does speak. The question is, are we wise enough to listen, and are we courageous enough to encourage others to follow where it leads.

Speak Lord, for your servants are listening. 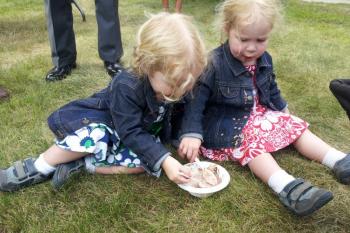