Tattoos have become commonplace in American culture. According to a survey taken last year, forty percent of adults in the United States, aged 26 – 40 sport at least one tattoo somewhere on their person. Body art has become an accepted way for people to express not simply their hobbies or names of loved ones, but also beliefs and values. But this trend is nothing new. Some early Christians, including many in Egypt, took the ancient practice of tattooing and infused it with Christian meaning.

The earliest evidence of Coptic tattooing of Christians goes back to the eighth century, when Egyptian monks began to brand their hands with Christian symbols. Some scholars believe they learned the practice from Ethiopian Christians, who branded crosses on their foreheads, temples, and wrists. (Christianity Today, 2009)

This brings us to the story of Ayman Labib, a Coptic Christian, who was seventeen years old when his teacher told him to cover up the cross tattooed on his wrist. Ayman responded by putting the crucifix he wore under his shirt on the outside. Eyewitnesses told his family that the teacher began to choke Ayman and his fellow students joined in beating him. He fled but was caught by classmates who beat him to death. The year of his martyrdom—2011. (Time Magazine, 2013)

Today we celebrate the Confession of Saint Paul. For many of us, the word “confession” means to admit to something damaging about ourselves—we generally think of it in relation to the confession of sin that we practice each Sunday. But the word “confession” bears another meaning as well. To confess also means “to acknowledge one’s belief or faith.” So—confession isn’t simply a matter of admitting the truth of what you have done or left undone—it is also about speaking the truth of what you believe; what you hold most dear in your heart.

Here’s something to remember about confession. Confession is always accompanied by consequences. In this morning’s reading from the Book of Acts St. Paul states his case before King Agrippa. He says: “I not only locked up many of the (Christian) saints in prison, but I also cast my vote against then when they were being condemned to death…” Now, that’s confession in the sense of admitting to wrongdoing. But Paul’s confession doesn’t end here. He continues by saying that he was heading to Damascus with the intent of persecuting even more Christians “when at midday along the road (he says)I saw a light from heaven, brighter than the sun, shining around me and my companions…. (and) I heard a voice saying to me in the Hebrew language, “Saul, Saul, why are you persecuting me?” Saul responded: “Who are you Lord’. The Lord answered, ‘I am Jesus whom you are persecuting. But get up and stand on your feet; for I have appeared to you for this purpose, to appoint you to serve and testify to things you have seen…” This is confession in the form of expressing faith and belief. The reading ends with Paul telling Agrippa that he has been entrusted with the task of bringing a message of repentance to the Gentiles (the non-Jews).

For his own part, Agrippa is impressed and intrigued with Paul. But alas, Agrippa holds no legal jurisdiction in Judea—and, as a Roman citizen, Paul is eventually sent to the capital city to his death. Confession carries consequences.

You might think that stories of martyrdom such as those of Ayman Labib and St. Paul, should convict us of nothing more than belief in the merits of keeping a low profile and foreswearing faith in anything that might cause us harm, much less our life. This might be true for some, but for others—Christians in China, Russia, North Korea, the Sudan, Syria and Nigeria, these are stories of hope. These stories speak to us of the belief that there are things worth dying for in this life, and there are consequences far worse than death—such as a life lived without faith or meaning. What’s more, there is the promise of our true life which awaits us in the realm of heaven. St. Paul says it best in his letter to the Romans: “Now if we died with Christ we believe that we will also live with him.” For Paul, the consequence of professing one’s faith is the promise of heaven.

There is a story told of a strange tower in which there is a large clock face without any hands to show the hour. Amazingly, the clock still runs perfectly. It is regularly wound up each week and has been functioning for many years; but for reasons no one knows, the hands on the outside of the dial were long ago removed and have never been replaced. So there it stands—a clock possessing no outward sign of the time. It’s a thing which could have been a blessing to the town in which it stood, but is, in fact, absolutely useless to everyone.

There are, I fear, a good many Christians in the world who bear a startling resemblance to this clock. Inside—that individual might believe in God—but from all appearances on the exterior—they show little or nothing of that grace to any outside eye. They are a blessing only to themselves. In point of fact, they are useless.

As members of the Episcopal Church, we might empathize with the clock with no hands—many of us (including, at times, myself) are both wary of and reticent about public displays of faith. Yet, I hope the stories of Ayman Labib and St. Paul might encourage you to consider how you express your faith in large ways and in small. In the year 2016, Christianity remains the most persecuted religion in the world. Each year thousands of Christians, from Nigera to Egypt, to Syria, China and North Korea, die for their faith. We are so fortunate in that we are able to worship without fear of persecution—and yet, it seems to me something vital can be lost if choosing faith becomes something which bears no cost. It is far too easy for us to take our freedom of worship for granted and cease to remember the importance of confession—of handing down our faith in Christ to others.

Today we celebrate the namesake of our Church—St. Paul, an outspoken witness for Christ—surely, as members of a community bearing the name of this enthusiastic evangelist, we should find ourselves infused with the challenge of witnessing to our faith. One way to answer the question is to pause and imagine that you have found yourself arrested for the crime of being a Christian. You are imprisoned, and soon will find yourself facing trial. Now, ask yourself whether there would be enough evidence to convict you?

Use this coming week as an opportunity to think about your witness to Christ, and to make certain that if you were thrown into prison for being a Christian, there would be no question as to what it is you truly believe. In Jesus’ name. Amen. 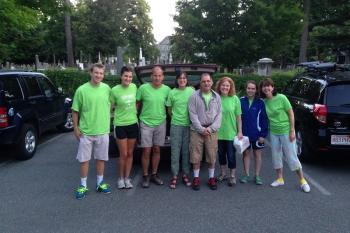